We do not like being used, especially being used about a tragedy that broke our hearts: Sandy Hook.

Hillary Clinton recently said on MSNBC that it was “unimaginable” but true that Bernie Sanders was against the grieving Sandy Hook families. Hillary is also running ads featuring the daughter of the valiant principal who died at Sandy Hook Elementary School as she tried to protect the children in her school. The ad brings tears to our eyes as the daughter describes the devastating loss of her mother whom she describes as her “rock” and her “best friend”, right before she endorses Hillary as being just like her mother.

How are we being used by Hillary and her campaign?

Hillary knows the range of her own changing positions on gun control. In her 2008 bid for the Presidency, her opponent, Senator Obama, said that Hillary was such an advocate for the right of American citizens to own and use guns that she sounded like someone “packing a six shooter” and that she was portraying herself as Annie Oakley. At that time, Hillary criticized Barak Obama for being against gun owners and gun manufacturers. Now the political winds have changed, particularly in Connecticut, so Hillary is on the other side of the issue.

The ad says that Bernie is “in the pocket of the NRA”, but it is Hillary, not Bernie, who took money from NRA lobbyists who hosted a fundraiser for her during this 2016 campaign. Hillary knows very well that Bernie has a D- rating from the NRA and that he decries the gun violence at Sandy Hook and elsewhere. Hillary knows that Bernie voted for expanding federal background checks on gun purchases in order to prevent guns from being in the hands of criminals and the mentally unstable. Hillary also knows that Bernie voted for federal legislation banning assault weapons. Once, he even lost a Vermont election because of his staunch opposition to assault weapons like those that killed the children and educators at Sandy Hook.

Hillary has now changed her 2008 position on the side of gun manufacturers and, in this campaign, is saying that gun manufacturers should be held liable when someone does harm with the weapons they manufactured. Bernie maintains that the gun manufacturers do not bear the responsibility for that harm because the government says it is legal for the manufacturers to make the guns. The question is a complex legal one and will be settled in court in 2018.

Hillary’s untruths about the record of Bernie Sanders and the distortion of her own history are bad enough, but for Hillary to communicate that message by playing on the grief in this state about the deaths at Sandy Hook is heartless and self-serving.

Those in the media are now asking if Bernie will tone down his criticism of Hillary in order to unify the Democratic Party. Fostering unity, however, is the primary responsibility of the frontrunner, the person getting ready to head the party. Those in the media are asking the wrong question. They should be asking why Hillary, at this time in the campaign, is taking the low road by impugning the character of Bernie Sanders. It is the responsibility of a frontrunner to take charge, end the attacks on an opponent, and lead by taking the high road in the name of party unity.

That person is Bernie Sanders. 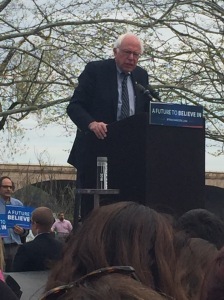 Senator Sanders speaking in Hartford on the day before the Connecticut primary: No attacks on the character of his opponent.  No distortions of the facts.  Clearly addressing the real issues: financial fraud on Wall Street, climate change, the minimum wage, immigration, education, and economic inequities .  A leader.