The other night, I was making shrimp scampi for the first time.  The man behind the fish counter at Whole Foods had talked to me about the importance of de-veining the shrimp exactly right and predicted unpleasant results if I didn’t follow his directions precisely so I wasn’t paying attention to the news on the small kitchen TV.

Then, out of the corner of my eye, I saw an ad which told me that this sweet, forlorn little girl was about to have her locker, her school desk, her teacher, her friends, and even “her very self “taken away from her if the Connecticut legislature did not fund new seats in her public charter school. 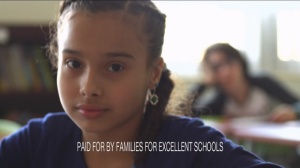 Moreover, the ad said that 861 children would be denied access to new seats in public charter schools.  The ad concluded with a plea to Connecticut legislators to live up to their responsibility for all of Connecticut’s children.

I continued to de-vein the shrimp.

Several shrimp later, the ad came on again, and I watched it more intently.

I heard again about the sad plight of the lovely little girl and was shown how happy she had been before everything was taken away from her (See below).

When I finished with the shrimp, I put the water on for the pasta. As I placed the cutting board I had used for the shrimp into the dishwasher, I looked to the TV, and there was the ad again. I saw once more how the little girl was overcome with sadness without her locker, without her desk, without her teacher, without her school, and without her very self.

When the water boiled, I added the pasta. The pasta took seven minutes to cook.  As I drained the pasta, the ad came on once again.  I heard for the fourth time that the sweet little girl would have her locker, her desk, her teacher, her very self taken away from her, and it was the fault of the Connecticut legislature because legislators were threatening to not fund new seats in her charter school.

By this time, I had a lot of questions:

First of all, how would this little girl have her existing seat, locker, friends, and teacher taken away from her since it is new seats, not her seat, that are at stake in the state budget?

Also, who has the kind of money to run this ad four times in the time it took me to make a meal that the recipe said took 30 minutes?

Why would that child in the ad be denied a locker, a desk, a teacher, and a school? Don’t we have public education in this country with lockers, desks, and teachers to which all students have a right?

What happened to Brown vs. the Board of Education and Sheff vs. O’Neill?  Aren’t all children better off in classrooms of diversity?  The children in the classroom in the ad, as typical of charter schools, are all children of color.

Why are the 861 children who could fill new seats in publicly funded but privately owned and privately managed charter schools more important than educating 98.5% of children in Connecticut who attend publicly funded and publicly accountable traditional public schools? Governor Malloy’s proposed state budget does not increase funds for traditional public schools but does call for an increase in funding for public charter schools.

Watching this ad convinced me that the governor has the wrong priority in requesting the funding of new charter schools seats and not increasing funding for traditional public schools. Even more importantly, I became aware of how parents and children in Connecticut’s inner cities are being taken advantage of by those who own and run publicly funded, profit-making charter schools. Parents in Simsbury, South Windsor, Fairfield, and Mansfield, or any other suburban community would not tolerate a publicly funded but privately owned and managed charter school in their town.

Can you imagine a neighborhood in West Hartford in which two or three of the children on the cul-de-sac attend a charter school, funded with $11,000 per student per year of taxpayer money and promoted as a superior school, while all the other children in the neighborhood attend what is said (by the charter school advocates) to be an inferior school also funded by taxpayer money?

Can you imagine New Canaan parents sending their children to an elementary school in which 23.78 % of the children are suspended as at a charter elementary school in New Haven (Achievement First’s Amistad Academy)? Or can you imagine Wethersfield parents sending their high school students to a charter school that suspended 58.6% of its students (Elm City College Prep) or 53.5% of its students (Bridgeport Achievement First) as compared to 25 % of high school students suspended from reform districts of “failing” schools and 12.3% as the state-wide average for high school suspensions?

Can you imagine a high school in Glastonbury in which 50% of the students who entered the school as ninth graders would be pushed out of that high school by senior year, thus producing a graduation rate of 50% although touted to be 100% because 100% of those not pushed out of the school did graduate? The graduation rates and college acceptance rates in Connecticut’s charter schools need to be scrutinized. For example, in 2013, Achievement First’s Amistad High School announced that 100% of its seniors were accepted to college. In reality, 38% of those who entered the high school in ninth grade were accepted to college, 25 students out of the original 64 ninth graders. The remaining 39 students were either held back in senior year or were no longer enrolled in the school.

Can you imagine a school in Madison having a 20-45% teacher turnover rate with young, uncertified teachers who have no teaching experience coming in each year and staying for an average of 2.3 years as in most charter schools, including Achievement First schools in Connecticut? High teacher turnover affects the quality of the education because it impedes the development of instructional cohesion within the school or school district. Teacher turnover rate in charter schools is much greater than in traditional public schools, and teachers in charter schools are more likely to leave the profession than teachers in traditional public schools.

Can you imagine the taxpayers of Greenwich supporting a school budget in which 10% of the budget went to a charter management company with no oversight by local or state taxpayers through the local Board of Education or the Connecticut General Assembly?

The answer to all for all of these questions: Of course not.

Families For Excellent Schools, though, is asking the state legislature to give to our inner cities, through the funding of new charter school seats, a kind of education that would not be tolerated in our more affluent towns.

Below is the last frame of the ad: 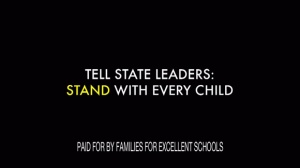 The words of this last frame of the ad are correct. The Connecticut legislature must stand with all of Connecticut’s children, most of all those being victimized by the charter school establishment, funded by billionaires such as the Walton family, owners of Walmart. The Walton family underwrites the organization called Families for Excellent Schools and, among others who do not give their names, is responsible for the ad I saw four times before dinner.

Connecticut legislators have a public trust to deliver to ALL Connecticut children a well-funded, taxpayer-accountable, integrated, PUBLIC school with experienced, knowledgeable teachers and administrators involved in the school for the long term, dedicated to providing the best learning experiences possible, and committed to graduating all the students who enter their schools.

It is the responsibility of legislators to give our inner city children the same quality of education that children in more affluent towns in Connecticut receive.  Those children do not deserve to be shuttled into academically limited, segregated, restrictive learning environments of  publicly funded but privately owned and privately managed charter schools. The legislature should not vote to fund the expansion of charter schools.  It makes no sense. It is simply wrong.